Wivenhoe chickens get a 'haircut' and rogue chicken is returned home 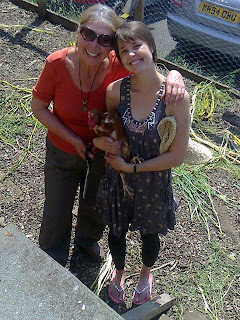 Yesterday Maureen and I had lots of fun with the chickens at the community chicken project coop. We thought - mistakenly as it turned out - that one of our girls had been escaping over the fence and taking herself on adventures about the village. So we postulated that it must be time to re-trim all those flight feathers (which allow them to take off). After trimming nearly all our birds however, we realised that we had an extra one which was not ours! Almost identical to ours, but definitely not ours! It then 'clicked' that this was probably the one which had been spotted wandering around the village - and taken for one of ours - and that we had trimmed the feathers unnecessarily. However, no harm done as it doesn't hurt them at all. We eventually tracked down the owner of the rogue chicken and returned her to her rightful coop. Apparently she really likes to go on walks and seemed to enjoy her time with our girls. Which was interesting, because we'd been led to believe that any new birds arriving in the coop are usually picked on terribly and bullied by the existing flock. It's nice to know that our girls extended a truly "Warm Wivenhoe Welcome" to the visiting bird.

So please do not be alarmed if you see lots of feathers on the floor of the coop - it was not a fox!

Many thanks to the Station Pub and all those lovely members of the community who at various points reported the wandering bird and put it into our coop. We are happy to receive any lost chickens as a 'holding pen' until rightful owners are found if it happens again in future.
Posted by WivenhoeChickenWhisperer (Rosie)