It Almost Really was a Nightmare Before Christmas.

Gusting winds on Christmas Eve played havok with our screen (it was borderline dangerous), so we had to retreat to the Scout Hall at the last minute for our screening of Nightmare Before Christmas. It was disappointing not to do the film outside, especially as later in the evening it calmed down and turned into a beautiful clear winter's night, but those are the shakes when you try and do things outside. Hopefully everyone that wanted to come found the signs that we put up at the entrances to the field.

Then we had a technical hitch with the sound too, a dodgy connection meant we had to ditch the EQ shortly after the film started. Grrr. So apologies for the slight pause and the EQless sound, hopefully it wasn't too disruptive. It's all fixed for Chasing Ice on Monday.

On the upside we raised around £50 for Wivenhoe Helping Hands, Cycle Cinema's new screen looks fantastic and the Food Group's pop up cafe had some very excellent treats on offer.

Happy Christmas everybody, and a big thanks to all that came, The Station Hotel for sponsoring the film and all who helped out. 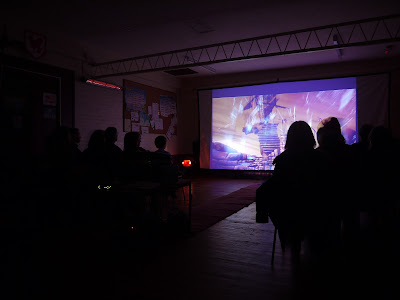