This isn't Wivenhoe, but it could be.

That time of yeat again (Part 4)

Sea Ice is about to hit the news again. Last year I bloviated a bit about why it’s important for climate (remember climate?).

I even had a little wager with Ruth on whether or not there might be a record breaking melt season, beating the previous low from September 2007. This year, away from the imminent headlines, something else is happening. 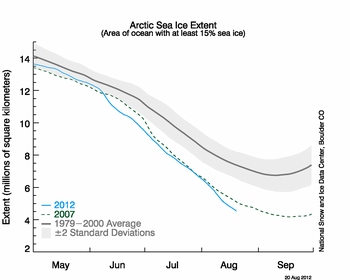 Sea ice extent (a way to measure surface area) is still all important for climate, but as we crash through previous records it’s important to understand that this year's ice might be the Arctic Ocean’s last hurrah.

The real story perhaps isn’t surface area at all, but ice thickness. Thick sea ice that has built up over many years is robust, it can withstand a storm or a warm season. But behind the scenes (and harder to measure) ice thickness has been declining much faster even than headline grabbing observations of extent. Areas of multi-year ice, even where they still exist, have become so fractured now that they no longer have any structural strength.

Warm water has been eating at the ice from below. Pools of sitting melt water has acted like lenses focusing the 24hr sunlight and concentrating melt on the surface. Heavy snow fall in winter (increased precipitation is another consequence of warming) rather than adding to ice thickness has instead acted like a layer of insulation and prevented its re-thickening.

Whatever ice that’s left from now on is a sitting duck.

After 2007 there was some speculation that the ice may have reached a tipping point - a point of no return. That was rightly criticised because we didn't have all the facts at hand. Now, thanks to records from ice breaking ships and confirmed by a new generation of satellites we're getting the full picture in 3D. Arctic sea ice has literally collapsed. The vagaries of weather are all that stand between now and ice free summers in the Arctic Ocean. Planet Earth probably hasn’t seen those for at least a million years.
Posted by Jason No comments: Links to this post

2nd August 2012
I collected my first share of vegetables yesterday, delivered to the Wivenhoe drop off point by Meg from Bennison Farm, where she and Danny have been growing food only since Spring this year and organising their 'Community Supported Agriculture' scheme.

And what a glorious, fresh, beautiful bag of veg it is. And, most importantly, supremely tasty! Hats off to them, and huge thanks.

There are still shares available for this year, so anyone interested should contact Meg and Danny to find out more  bennisonfarm[at]gmail.com 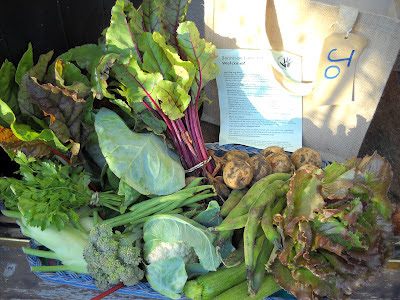 Posted by TransWiv Member No comments: Links to this post