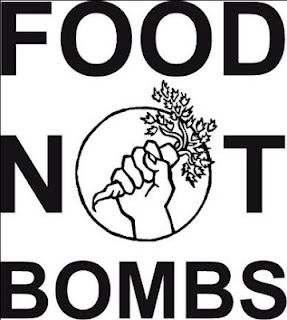 For over 30 years the Food Not Bombs community has been collecting and redistributing vegetarian and vegan food that would otherwise be wasted. There are over 400 autonomous groups worldwide.

FNB are individuals voluntarily coming together to take direct action in protest against military spending and other destructive capitalist forces that produce waste* and cause many to go hungry. We live in an unsustainable system in which profit is put before people and the environment, and where resources are mismanaged and exploited. Global military spending for 2012 reached £1030 billion or £147 per person - a 50% increase since 2001. One third of food is wasted annually costing the UK over £10 billion. Wasteful consumption of food in rich countries reduces the overall food supply and inflates prices on the global market, making food less affordable for people in the developing world. There are nearly a million malnourished people in the world but all of them could be lifted out of hunger with less than a quarter of the food wasted in Europe and North America.
*includes greenhouse gas which escalates global warming.
Posted by TransWiv Member