A quick update on September’s summer ice shenanigans at the Arctic. According the the National Snow and Ice Data Center the season ended a little early this year and the 2007 record minimum for summer ice extent is still intact, but only just. Other data-sets said otherwise (.pdf from University of Bremen). But NSIDC was our measure, Ruth lost the bet and did a dashing turn as a medieval serving wench. There are photos.


Even though the minimum extent wasn’t the lowest ever, this was an interesting year in other ways. The crash in ice extent in 2007 was the result of warming strongly boosted by natural factors such as wind which pushed the ice South into warmer waters. This year those natural factors were doing the reverse and keeping the ice intact - the minimum could easily have been much lower.  And now September is over we can update our graph - the average ice extent for the whole of the April to September summer season (the one that counts) was the lowest since satellite records began - so the all important ‘albedo’ was low and the Solar Radiation Budget (warming) for the region was high. 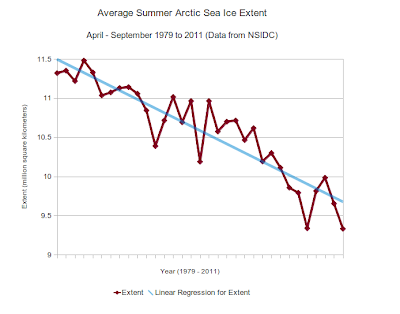 Just to add to your measure of eco-guilt for this weekend,  not all ice is born equal. Multi year ice that gets a chance to build up when there is less melt at the Arctic is more robust than the single year 'slush puppy' ice that forms in winter following a large summer melt. This year's big melt has left the Arctic ice that bit more fragile and more prone to melt next summer.
Posted by Jason